The Benefits of Replacing Polystyrene (Styrofoam) with Molded Pulp Containers

Polystyrene, commonly known as Styrofoam, is a type of plastic that is widely used in the food industry for packaging and containers. However, there are a number of concerns about the use of polystyrene, including its environmental impact, potential for chemical leaching, and difficulties with recycling. As a result, many cities and states have banned the use of polystyrene in food packaging.

One alternative to polystyrene that has gained attention in recent years is molded pulp, which is made from renewable resources such as cornstarch, wheat straw, and bamboo. Molded pulp has several potential benefits compared to polystyrene, including biodegradability, renewability, sustainability, and the absence of chemical leaching. In addition, molded pulp can often be recycled along with paper products, and it may be more cost-effective in some cases. 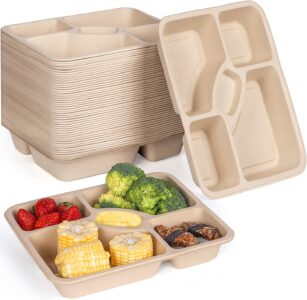 application, it is clear that this material offers a more sustainable alternative to polystyrene. By replacing polystyrene with molded pulp, cities and businesses can reduce their environmental impact, improve recycling rates, and protect the health of their customers. It is important for the food industry to consider the use of molded pulp and other sustainable materials in order to promote a more sustainable future.

There are a number of reasons why cities and states have banned the use of polystyrene (Styrofoam) in food packaging. Some of the main reasons for these bans include:

It is generally recommended to avoid using polystyrene, also known as Styrofoam, containers for storing or transporting food, as the risk of chemical leaching may be higher in these cases. The most well-known chemical that can leach from polystyrene is styrene, which is a possible human carcinogen according to the International Agency for Research on Cancer (IARC). Other chemicals that can leach from polystyrene include benzene, toluene, and xylene, which are all toxic to humans.

The extent to which these chemicals can leach into food, and the potential health effects of this leaching, will depend on a number of factors including the type of food, the duration of storage, the temperature and pH of the food, and the specific type of polystyrene being used. It is generally advised to use caution when storing or transporting food in polystyrene containers, and to consider using alternative materials whenever possible.

Newer The Benefits and Advantages of Sustainable Packaging for Grocery Packers
Back to list
Older Why the Boom in Biodegradable and Compostable Packaging?